skip to main | skip to sidebar

So yeah, I've pretty much always wanted a hat like this but I've always been way too chicken. Today I figured what the hay and broke down and got one. Jealous? haha :) 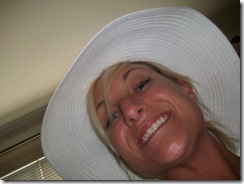 Bliss.  Rushed home after work to catch a few rays of sun and read Breaking Dawn. Now that the cleaning out the fridge is complete, I'm sitting at the apartment in silence with the aroma of pork chops in the oven. I have my pjs on and I'm feeling like a true princess. Grrr, too bad all of this has to be taken away from me to go grocery shopping by 8pm...

Posted by Amanda at 6:52 PM No comments:

This weekend has been pretty fabulous. Relaxation, discovery, sun....my boyfriend Daniel and I decided to check out Rickwood Caverns Saturday. Such a fun experience to see the underground like that. It was nice and chilly (a breath of fresh air considering the summer heat) and a way to learn about what goes on below the earths surface. No pictures, just wanted to soak it all in.

Today was spent laying out with my mom. We then gambled with my hair color. Medium blond turned into old asphalt road. Blueish gray. It was horrid and I was scared! Mom finally fixed the mess and now I am bleachy blonde!

Tonight my time is being spent watching Lost and eating pistachio icecream! Yums :)

Well my car's air conditioner totally went out this weekend. It was blowing hell in my face. The heat index was up to 105, and I was sweating like a man. I took my precious car to get the AC serviced at coolant added to find out that my compressor is "weak." They of course can't tell you when it will go out - but they said it may cost anywhere from $900 - $1700 bucks to fix. Laughing out Loud! We will run her until that day comes....then she will have to be replaced. I can't fathom paying almost the value of my car just to have AC. However, in Alabama....AC is a basic necessity.

Uh huh, a new additional blog has been added. If you are curious you can peek at www.too-graphic.blogspot.com. Speaking of 'graphics' I need my lovely Joanna to throw some ideas my way. No worries - I won't be your competition :-) Well, OK maybe friendly competition/awesome helper {one day}
Posted by Amanda at 5:57 PM No comments:

I really do not know what possesed me to do this today...but I did. Every once in a while I would just type the time & what I was doing at that moment. I finished up prior to the end of the work day because I needed to use the last hour and a half to really crank it out & get all caught up for the weekend. So, have fun with this totally random post!

8:15am Went to my managers desk to pound knuckles {this is something that we do every single morning} and update each other on what’s going on in our life.

8:20am – Listened to everyone around me discuss Doctor’s visits, how terrible they feel, and who they are blaming for getting sick. Ran to the end of the isle and covered my hands in sanitizer.

8:30am – Talked about my co-worker about her weekend plans in Chicago. Its her first plane ride & it is a work trip. Should be fun, it’s a Rugby game! I gave the 411 on what to expect while traveling.

8:42am – Got my first text from Daniel & announced to a co-worker that someone should have “kicked my butt” for not majoring in Spanish.

9:11am – Another co-worker has a tummy virus, came to work today anyway because she only has one sick day left. Discussed calories & weight with my boss, refilled coffee, stopped at the end of the isle and covered my hands in sanitizer again.

9:47 – Talked to a Soldier, asked for his number so I could call him back – then he asked if I was married. He said he was, but he didn’t want his wife to find out about us.

10:05 – “It is what it is” that’s the second time someone said that quote to me this week. It’s actually a very powerful statement. Not everything in one’s life can be controlled.

12:45 – Returned from lunchbreak, ate frosted flakes, almost ran over a guy in a blue shirt, got stuck behind a Merita truck going 10mph.

1:08 – The sound of a ringing phone is making think I’m losing my mind. And I’m considering getting prescribed prozac.

1:32 – Bought a pack of gum today only because it said “uber” bubblegum on it. Smacking on a piece now. Tingly good!

2:03 – Had to encourage a friend to respond to a handsome, lawyer met on an online dating site.

2:20 – “There’s no such thing as a free lunch” -TNSTAAFL- The "free lunch" referred to in the acronym relates back to the once-common tradition of saloons in the United States providing a "free” lunch to patrons who had purchased at least one drink. TANSTAAFL, on the other hand, indicates an acknowledgment that in reality a person or a society cannot get "something for nothing". Even if something appears to be free, there is always a cost to the person or to society as a whole even though that cost may be hidden or distributed. For example, you may get complimentary food at a bar during, but the bar owner bears the expense of your meal and will attempt to recover that expense somehow. Some goods may be nearly free, such as fruit picked in the wilderness, but usually some cost such as labor or the loss of food for local wildlife is incurred (wikipedia).

3:03 – Researched Homes for Our Troops and am considering having a yard sale and donating proceeds to the cause.

3:39 – Realized that I better quit documenting and go ahead and post.
Posted by Amanda at 3:40 PM 2 comments:

Tagged! 6 Things About Me

The rules are pretty easy to follow…The person who has been tagged lists 6 things about herself then tags 6 other people who do the same.’

Here are my things…

1. I can make three loops with my tongue, and also touch my nose with my tongue
2. I have never watched Star Wars – and don’t plan on it either
3. I’m terrified of praying mantis’ & sloths
4. I drink at least a pot of coffee a day (2 creamers & 2 artificial sweeteners per cup!)
5. I have a deep desire to work with deaf children. However, I do not even know sign language but would love to learn! So should have went into audiology instead of business!
6. My biggest pet peeve is coat hangers & tupperware bowls

Would tag others but I'm at work & gettin' super busy! Sorry!
Posted by Amanda at 2:21 PM No comments:

Do you ever just feel like the regular "daily grind" is almost undoable? I am feeling exhausted. Because of what? Showing up to work from 8-5, working out afterwards, & doing daily chores? Now, it is a full day no doubt - but I'm trying to figure out why it totally exhausts me. Maybe because it is endless & I see no light at the end of the tunnel? Imagine throwing a family in the mix. Really. Really think about that. Yesterday I went to work, exercised for about 45 minutes, ate supper, took a shower, cleaned up (kitchen, laundry, bathroom) and I finally took a seat at 9:45. Wide open! So that's Monday through Friday. Over & over again. Weekends are normally spent catching up on errands not able to complete during the week with a little relaxation thrown in there. And then there it is...Monday again!

Now I just got to my apartment on lunchbreak. I have 15 minutes to scarf down (pre-made) tuna and crackers. Then I have to put my shoes back on and finish out the day.

However, all of the above complaining is due to being really blessed. I do have a job, I do have a place to live that requires upkeep, and I am being healthy by working out. Apparently blessings do take a lot of work. A lot of patience. A lot of sacrafice. "There's no such thing as a free lunch!" Ha, remember that? Hmmm, isn't that about the economy? Thinking back to highschool. I should brush up on my skills. If I'm going to quote something - I need to remember what it's about. Duh! 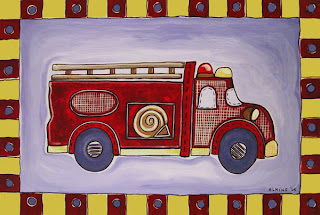 A few nights ago around 11:00, my boyfriend and I heard a really loud buzzer going off outside my apartment door. We quickly realized it was the fire alarms going off. It makes sense to us to run down (4 flights of stairs) to the bottom – as a precaution that there may be a fire right? We were the only ones in the parking lot. Daniel (my boyfriend) looked around to see if he saw a fire. I didn’t see or smell anything either. I only smelled sweet honeysuckle. We went back upstairs. After about 25 minutes of alarms we thought the fire department (which is literally right across the street) would have come to the rescue. No such luck. By this time there were about 15 people downstairs so we made yet another trip down the stairs thinking that maybe there really was something to be concerned about. Nope. Someone must have pulled it as a joke. We called 911 because the fire department still didn’t show up and we wanted the alarms to stop so we can get some sleep. Its two days later….still a no show. However, the “alarm guy” did fix it. All I gotta say is…thank God there wasn’t an emergency, cause the building would have burned all the way to the ground.

Amanda
I'm just a small town girl who's embracing all that life is throwing my way. Coffee gets me through the day - Diet Sunkist rocks my world - Pier one, World Market, and Books A Million expects a visit from me weekly - I like trying new things while setting and meeting new goals. Welcome to this life of mine that can only be described as a 'frizzle-frazzed' beautiful mess!